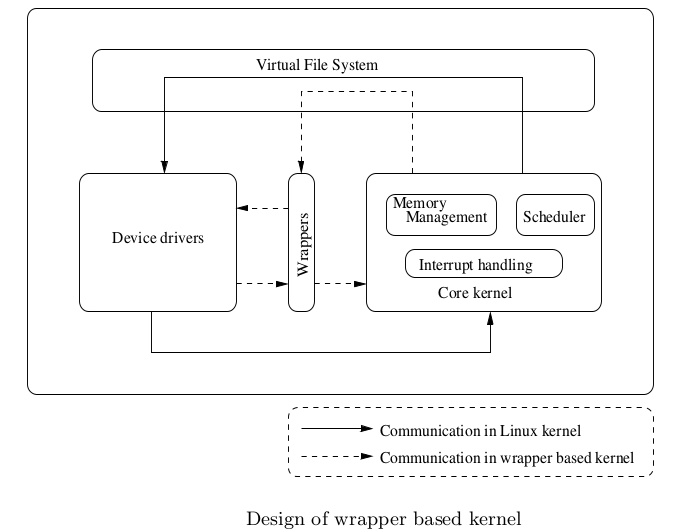 Linux kernel is one of the most popular and widely used open source operation systems. It has been developed in a procedural manner with the primary focus on the system performance. As a side effect, there are maintainability issues arising due to high coupling in the kernel. The entire kernel source code can be divided into two parts : the core kernel and the device drivers. Given Linux kernel popularity, it is deployed on a wide range of machines and supports numerous hardware devices. The device drivers constitute the majority of the kernel code and are also responsible for the majority of the kernel bugs that are found. MOOL Kernel has been developed at DOS ( Distributed and Object Systems) Lab, IIT, Madras. MOOL features a device driver framework to write drivers in C++ and insert them as loadable kernel modules.

DOS Lab at IIT Madras and CDAC Chennai have integrated the MOOL kernel into BOSS MOOL distribution. BOSS MOOL supports C++ device drivers. This feature is a new offering of BOSS to the Linux community.Further, the BOSS-MOOL Kernel supports localisation at Console level, which hitherto was not available on any flavors of LINUX.The students can also develop Message filters. Message filters work by intercepting system calls, built using object-oriented wrappers which provide better maintainability and extensibility, without modifying the existing kernel code. Placing them at the system call level disturbs very little of the kernel code.Filters are developed as kernel modules, so they can be dynamically added at runtime. When a user makes a system call, it is forwarded transparently to the filter which in-turn will call the actual system call. The users and applications are not aware of the presence of filter model, as there is no change to the user interface. Hence this design provides a transparent way of intercepting messages for the kernel.

For example, the filters can perform biometric verification by adding face recognition or finger print recognition algorithm as policies.

To become a partner with BOSSMOOL

CDAC, Chennai and IIT Madras jointly works to evangelize BOSS MOOL in engineering colleges and universities.MOUs have been signed with the following universities:

Once the college signs the MOU, CDAC would Establish the Complete Foss lab ( BOSS – MOOL ) with the help of the Lab Assistant for migration of Entire Client and Server Machines to BOSS-MOOL. CDAC shall provide training on BOSS-MOOL to the Network administrators of the colleges.

Currently tty drivers for Indian languages are being written in C++ for BOSS-MOOL kernel. Apart from the language drivers, the following drivers are selected to be redesigned in C++.

We welcome any contribution towards fulfillment of a C++ device driver repository. Please post your driver code here.
A small tutorial on writing C++ modules in MOOL kernel is given below.